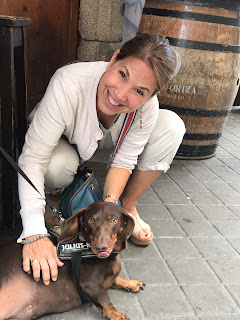 There I am in the middle of La Coruña, Spain, when I come across a chubby but loveable dachshund. He was just waiting for me to hug him. For real. Tail wagging enthusiastically and everything. So I did. And the owners loved it. Even a language barrier (though I do speak some Spanish) couldn’t stop these owners from appreciating someone who loved their fur baby almost as much as they did.

After my quick pit stop to hug the dog (who will be forever known by me as “fat dachshund” since I’ve forgotten his name), we continued onto Torres de Hércules. It’s supposed to be the oldest lighthouse in the world that is still in use. The Romans built it in the 2nd century, so yeah, it’s OLD. literally ancient. Lynda and I were the brave souls amongst the four of us who wanted to climb the tower in order to check out the views at the top. It was 230 steps… not bad, I think. I only managed thirty minutes on the bicycle at the gym this morning, so why not get in another aerobic workout and take in some beautiful scenery at the same time? And beautiful it was. WOW. The water in La Coruña is something to behold… a gorgeous aquamarine, turquoise color. So enticing you wished you could just dive into it if it weren’t for the fact that the waves would knock you flat on your you-know-what, and the frigid temperature would probably put most into cardiac arrest!

Still, it was nice to take in the views of the water from the top of the tower. Totally worth the climb. Check out this amazing vista:

After we descended, we headed back into town and I kept talking about “fat dachshund”. Was he still at the café where we had spotted him, lazing away the afternoon while his owners enjoyed their beers? So of course I wanted to breeze by and see for myself. Besides, Andrew likes his afternoon coffee and cake so what better place to do that where I could also enjoy the company of the cutest dachshund I had ever seen?

Suffice it to say, “fat dachshund” WAS there, and the owners were only too happy to snap that pic of me hugging their enthusiastic tail wagger. Meanwhile, the four of us relaxed for a bit, and I had the most delicious tiramisu I’ve ever tasted (FYI it was more expensive than the glass of Spanish rioja I also enjoyed). You gotta love a country where alcohol is cheaper than food. Yay Spain! As we sail out of the harbor, leaving our final port behind, I wish “fat dachshund” a fond farewell and hope he continues to make other passersby as happy as he made me. Adios mi perro!!!

Email ThisBlogThis!Share to TwitterShare to FacebookShare to Pinterest
Labels: The Jewoppy And The Jew Season 2