Is that a boulder on my chest? Oh no, it’s just a 28 pound cat named Pappy.

I’ve been a dog lover all my life, but I have to say, cats are fascinating. You gotta give props to a creature that can purr affectionately in your ear one minute, and then scratch your eyes out the next. Others scoff and pay no respect to our feline friends, but not me.

My friend Craig, for example, can’t stand the “lil bastards,” as he calls them. This is a man, by the way, who was in the musical “Cats” on Broadway. I’m not even going to tell you what he did to the tails of his fellow “cat-mates.” According to Craig, cats mess with his “chi.” Ummm… okay.

I just dig cats’ personalities. My friend Marcy is currently staying with me, and she has a bruiser of a cat named Gizmo. God bless her, but Gizmo can be such a bitch! She slaps me when I love her too hard, and then hastily retreats to the safety of her kitty condo, which is basically a panko chicken box. Gotta love her spunk.

But what about the boulder and the 28 pound cat? I’m getting there…

It all started when I agreed to babysit my friends’ daughter for the weekend. Mom and Dad were off to see Marillion in Montreal. You know Marillion? They had a hit with the song “Kayleigh” back in the 80s. Ring any bells? Yeah, I didn’t think so. They actually put on a really good show, and my friends were geared up to see all three performances. That’s dedication (or insanity—you decide.)

So here I was, in the burbs with a 9 year old little girl named Shayna and her four cats. I was walked through the various activities for which I’d have to do pickups/drop-offs. Let me say to anyone out there who may be a parent; picking up your kid from school these days is serious business. You have to arrive at the appropriate time to line up in your car and wait for your child to emerge from the appropriate door. If not, you have to park your car and stand outside, while kids run willy-nilly in every direction and you helplessly scan the crowd hoping to spot your kid in a sea of backpacks. It’s stressful! What happened to the days when it was safe to walk home from school by yourself, with only a crossing guard to guide you?

But to be honest, I wasn’t that worried about taking care of Shayna. This is a girl who properly uses the word “foreshadow” in a sentence, already knows who Dizzy Gillespie is and when I told her what my latest play is about she said, “I didn’t ask you what the moral was. I asked you what the story is about.” Is this kid for real? For the record, I’m still not sure I know what my play is about, but I do know Dizzy’s song “Salt Peanuts” thanks to her.

No, it wasn’t Shayna who was giving me pause. It was those four kitty cats. There was so much to keep straight! First, the lovable Frankie… lovable, that is, until his allergies cause him to snot all over clothing, blankets, my winter hat—whatever is in the path of his exploding nasal passages. Then there’s the shy but soulful Clementine, aka “Tiny,” who has six toes and clicks down the hall like she’s wearing high heels. But her breath? Holy moly! It can knock you out flat. Next is Kasha, who likes to prowl around outside and needs to be let back in at random times (and I do mean random) through a window that leads onto the roof. At last, there’s the aforementioned Pappy. He is a beefy, orange cat who has apparently decided his “wide load” can no longer fit into his litter box, and thus pees in a tinfoil pan that is big enough to hold a 50 pound turkey. Pappy, like Kasha, also ventures outdoors, but don’t expect to see the two of them frolicking around the yard. They despise each other, and I was forewarned about potential carnage if they got too close to one another. A real life catfight?  No thank you.

As it turned out, the weekend went pretty smoothly. It’s always nice to indulge in fish sticks and Domino’s pizza and tell yourself, “I’m just eating it because that’s what the kid likes.” Yeah right. Same is true for belting out Bruno Mars’, “Locked Out of Heaven.” Is it my fault if we both knew all the words and felt like singing them at the top of our lungs? “Ain’t No Mountain High Enough,” however, was the anthem for the weekend and if I do say so myself, we sounded quite lovely together. While in the burbs, I discovered an amazing reality show called “Bar Rescue,” hosted by Jon Taffer. Now that guy is a badass. The Piratz Tavern episode will live on in infamy for years to come. As for my responsibilities, I got all my pickups/drop-offs right, and Pappy and Kasha managed to keep their claws to themselves.

On my last night, I passed out fairly quickly, but soon felt myself tossing and turning. I was hot—like a-subway-platform-on-a-100-degree-day hot. Did I somehow get dropped into the depths of Hell? Thwack! What just landed on my bed? I opened my eyes. Oh, hello Pappy. Apparently Pappy decided 3:30 a.m. was the perfect time to snuggle, as he laid his head on my chest and rested all 28 pounds of his body against my side. Normally I welcome a good kitty cuddle, but when I am already on fire, Pappy leaning on me was like wearing a fur coat with weights in the pockets.

I checked the thermostat and it said 80 degrees. What? In New York City, your landlord controls the heat and there are two options—“on” or “off.” I don’t know how to work this digital thermometer crap! Leave it to the brilliant 9 year old to realize we could just turn on the A/C and cool things down. Doh! I guess kids apparently say and do the darndest things.

The next day Mom and Dad returned from their Marillion Pilgrimage, and it was time to return to my “real life.” No more little girl and no Frankie, Kasha, Pappy or Tiny. Sigh. At least Gizmo was waiting for me at my humble abode in Astoria, Queens. I walked into the apartment, excited to see her beautiful face. What did she do, you ask? Nada. She just sat in her kitty condo with her head turned away from me. She didn’t even have the decency to look me in the eye. Some “Welcome home!”

Check out the face she gave me today: 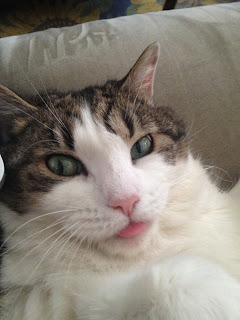 Burlesque at Nurse Bettie… or when people smell like the garbage they walk by in the street.

The night started out pleasantly enough. I was all set to go see my dear friend Rosie Cheeks perform a special St. Patty’s Day Burlesque show at Nurse Bettie on the Lower East Side. My two gal pals and I pre-gamed it at my place by sharing a bottle of Prosecco before heading into the “city.” These days we were all slumming it in Astoria, Queens, and our trips to the island for anything other than work were sadly too few and far between.

We arrived at Nurse Bettie and met up with another friend, who was waiting for us by the bar. It should be mentioned that Nurse Bettie is a spectacularly beautiful venue. I adore the place. In fact, it was my neighborhood joint back in the days when the Lower East Side WAS my neighborhood.  The bar is super tiny and it was hard to imagine how they were going to fit burlesque performers in there, but I guess there’s nothing like getting up close and personal to someone shaking their tassel-clad tatas.

The Singing Siren was our host for the evening and the name says it all. In Greek mythology, “Sirens” were femme fatales who lured sailors to devastation with their beautiful singing. I don’t know if there were any sailors in the crowd, but this woman could certainly belt out a tune like nobody’s business. She was equally adept at comedy and poked just as much fun at herself as the audience, remarking at one point that her accent kept fluctuating between Irish, Jamaican and British. She told me I apparently have a burlesque doppelganger named “Dot Mitzvah.” Good to know my “inner exhibitionist” is being released by my counterpart, who, like me, is also Jewish. Thank you, Dot!

As for the burlesque performances… they were amazing. Each girl had her own unique tribute to St. Patty’s Day. Of course, the highlight of the evening for me was Rosie Cheeks. She entered to “Somewhere Over the Rainbow,” wearing a beautiful green gown. And what’s at the end of every rainbow? Well if you’re Irish, it’s a pot of gold, of course, and Rosie had one of her own—appropriately placed over her hoo-hah. The icing on the cake was when she tossed chocolate gold coins to the audience—and yes, I did dive for those treats and managed to snag three!

I’ve been to several burlesque shows now. Does that make me a “burlesque groupie?” Perhaps, and I’m okay with that. What I’ve realized is how creative the art of burlesque actually is. We all know the end result going into one of these shows—the clothes are coming off. However, what we don’t know is HOW and WHEN they’re going to come off. There are different costumes, music and movements. The good burlesque performers have a story to tell and I am continually impressed and proud of Rosie’s skills at coming up with her stories. She’s been an “Ice Cream Woman,” “Frankenfurter” from “Rocky Horror,” a “Snowflake,” a “Lady in Red,” and now an “Irish Lassie.” What’s next? I guess I’ll have to go to more shows and find out.

And this is about where I get to the smelly garbage… After the performances were over, the girls and I turned back to the bar and as I sat down, I smelled the most horrific odor that almost knocked me right off the stool. I thought to myself, “I hope that’s not my friend. She really needs to shower.” As if she read my mind, she turned to me and said, “The person next to me smells like GARBAGE!” And I immediately replied, “Oh thank God. I thought that was YOU!” It didn’t relieve me of the stench, but at least I knew the perpetrator was someone other than my friend.

Then… just as we thought we had the smell contained to one person, someone else approaches the bar—this time a guy. As he uttered, “Excuse me,” while leaning over to order a drink, his kitty-litter breath hit all of us square in the face, and we simultaneously crinkled our noses in disgust. To add insult to injury, there was a tall dude floating around the bar who smelled like french fry grease! Is this some kind of subculture I’m not aware of? Perhaps they have meetings, and are obliged to wear dirty clothes and aren’t permitted to shower or brush their teeth. Maybe they assemble in some dingy basement pounding their fists in the air, cheering: “Stinkie people of the LES unite!”

Maybe I’ll form my own club, complete with my own cheer. What would be my battle cry? “Clean freaks of the world, hold up your vacuums!” Or maybe it should be something about Jewish Italian girls and their double whammy of guilt… dunno. I guess that’s a different story for another day…
Posted by Jewoppy at 8:17 PM No comments: