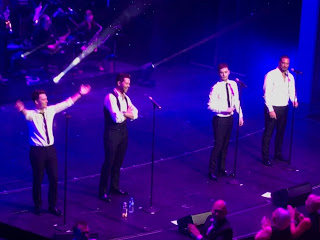 At least that’s what the Jack Pack told me when they sang the famous Frank Sinatra song at their performance tonight. In case you don’t know, the Jack Pack was a finalist on Britain’s Got Talent a few year’s back. Imagine Michael Buble x 4… yeah, totally pleasing on the eyes and ears. Look ‘em up… super adorable.

What I liked about them was that they really DID seem to be doing it their way, and they were having fun DOING it. And that was the theme of my day, albeit not as fun I suspect. I did some exercising, played some Bingo (and lost) and recorded two-self tape auditions in my cabin. Not bad for a day at sea, huh?

A part of me would have preferred parking myself on a deck chair and just reading a book all day, but life continues to happen – even when you’re on vacation - and sometimes  work has to get done. But I guess if I get to end my day with some good entertainment and good conversation with friends, it’s not so bad.

Food for thought to the Jack Pack... apparently they lost in the finals of Britain’s Got Talent, getting only 10% of the audience vote. The song they picked? None other “My Way”. My British friends told me that same song is played at a lot of funerals in England. Hmmmm.... perhaps the boys should’ve picked a song that isn’t associated with death in their homeland? Maybe they would’ve garnered more votes if they had sung something happier like “You Make Me Feel So Young” or “Nice ’N Easy”? Just sayin’.

Email ThisBlogThis!Share to TwitterShare to FacebookShare to Pinterest
Labels: The Jewoppy And The Jew Season 2